Tripp and Andrew Laino have been watching movies together since 1992, and making fun of them together since 1999, when an ill-fated afternoon of babysitting turned into 8 straight hours of cheesy science fiction, popcorn and jokes. Raised on a strict diet of 80s adventure, action, comedy and drama, the pair have an undying love for the 1980s and all of the weird, wonderful cinema therein. Since 2014, they’ve hosted this podcast – every other week they dissect a movie (or sometimes a TV show), finding plot holes, bad lighting and acting choices and the bizarre cinema quirks of 30-odd years ago (Smoking in hospitals! Rubber suits without neck hinges! Corey Feldman!). 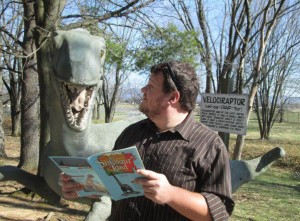 is a writer who lives in Baltimore. When not working in the corporate world, he freelances for a number of publications, mostly writing about food. He threatens to fire Andrew roughly twice a week, but so far has not chosen to do so. He’s also in charge of making sure the show actually appears on a fortnightly basis, unlike his partner, who mostly just shows up and rides his coattails. Favorite 80s icons include Arnold Schwarzenegger, Sylvester Stallone and the guy who did the really fast talking at the end of G.I. Joe commercials. 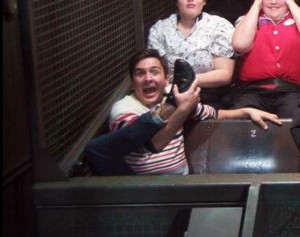 is a professional actor and costume designer in the Philadelphia area. Some of his favorite performances include Puck in A Midsummer Night’s Dream, Matt in Mother Tongue, and Neleus/Featured Dancer in Mary Poppins. He is also the resident costume designer for SALT Performing Arts in Yellow Springs. A former Walt Disney World Cast Member at the Rock n’ Roller Coaster, Andrew will bend your ear for hours if you’re foolish enough to bring up Disney Parks. Favorite 80s icons include Bea Arthur, Cyndi Lauper, Jem, and Gremlins. Throwing Gremlins at the end makes it sound less gay, right, Tripp? You can just take out that last sentence and this one when you post it.